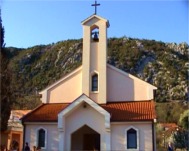 In the church of the little village of Surmanci, a place only a few kilometres away from Medjugorje, there is a miraculous icon of Jesus of Mercy.

In 1990, this icon was in the Sanctuary of Divine Mercy in Trento. This is where Ugo Festa was  cured miraculously.

Ugo Festa was born in 1951 and, as a youth, became ill with multiple sclerosis. In addition to this already very serious illness, he suffered with other terrible afflictions: towards his 30th birthday he is victim to muscular dystrophy as well as to epilepsy, and then has a serious condition with deformation of the spinal cord and convulsive crises every day. He is condemned to a wheelchair. His condition is so serious that even his doctors admit that there is nothing more they can do for him. As a reaction to the atrocious destiny ahead of him, his rebellion against God begins. However, Ugo understands that there is one thing left to do: he can only pray, call out to God. Hence, on the 28th April 1990 he goes on a pilgrimage to Rome: he is presented to Mother Teresa, who is in Rome at that time. She consoles him, caresses him. He is asked to go and pray at the Sanctuary of  Divine Mercy at Trento, but he refuses. One of the nuns from the group, however, leaves him five copies of the holy picture of the Divine Mercy and a medal with the same icon.

The following day, on the 29th April, Ugo asks to be taken to the audience with the Holy Father, in the Aula Nervi, with the little medal around his neck and the holy pictures in his arms ready to be blessed by the Pope, but with a feeling of embarrassment because he had never really been much of a saint. On the steps of St. Peter’s Basilica, Pope John Paul II goes past, close to him. The Pope looks at him, he stops, blesses the pictures and asks the strange, suffering man “How are you?” At this point, Ugo lets out all his despair, he says that he is totally discouraged and is going through a profound crises. In this cry, all his lifelong pain and rebellion is shown.

The Pope listens to him, smiles at him tenderly and then says: “How can you be undergoing this crises if in your arms you have the Merciful Jesus? Entrust your whole self to Him and pray my Sister Faustina to intercede for you.”

Ugo is struck by the Pope’s words. Within him something has changed. He therefore decides to go to the Sanctuary of Divine Mercy in Trento. Before the picture of Jesus, of a human size, he prays for three days. On the fourth day, something unexplainable and extraordinary happens. Ugo notices all of a sudden that the picture has become alive and Jesus is really holding out His arms;  he feels that  all of his body is filled with very strong heat. He finds that he is standing with his arms outstretched towards the Lord and he invokes Him with all his strength. He sees Jesus coming towards him, wearing that white gown swaying like the breeze. Ugo, in a fraction of a second, thinks: “My God, but he’s the man from Galilee. And he is actually coming towards me!” He cannot believe his eyes, he is doubting, he is afraid he might be going mad, or dreaming. At this point he hears Jesus who pronounces these precise words: “Get up and walk!” And so he begins to walk. All of a sudden, all of the serious illnesses that were burdening him disappear, are healed. Suddenly, he is physically healthy as never before in his whole life. In an instant he is another man. To make sure, he runs outside. He is bewildered, but happy.

On the following 19th August Ugo Festa goes back to Saint Peter’s, to the Pope’s audience. He is again taken to the Pope. There were no more tears of pain but rather of joy. He tells John Paul II about the immense grace he has received and he thanks him for having suggested, on the previous  29th April, to turn to the Divine Mercy. From this moment on a new life begins for him.

He leaves as a voluntary nurse to help Mother Teresa in her missions in India and in Africa and he dedicates his life to assisting the most needy people, especially foreigners (Non-Europeans), until the moment of his death.on the 22nd May 2005.

The miracle obtained by Ugo Festa is in the Acts of the proceedings which have taken Saint Faustina to the altars and confirms the mysterious bond between Pope Wojtyla and the Polish nun.

In the meantime, on request of the Archbishop of Split, mons. Franic, the icon has been sent to Split for the occasion of an important procession for peace, with Medjugorje as the final destination. There, it is collocated initially in the Chapel of the Adoration and then transferred to the church of Surmanci where it remains today. In this church, besides the icon of Jesus of Mercy, there is also a relic of St. Faustina.